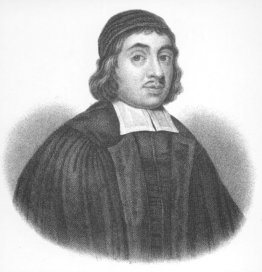 Christopher Love (1618 – 22 August 1651) was a Welsh Protestant preacher and advocate of Presbyterianism at the time of the English Civil War. In 1651 he was executed by the government, after it was discovered that he had been in correspondence with the exiled Stuart court. He went to his death as a hero and martyr of the Presbyterian faction which had petitioned in vain for his pardon.

He became domestic chaplain to John Warner, the sheriff of London.[1] There he met his future wife Mary, daughter of Matthew Stone, formerly a merchant in London, who was the sheriff’s ward. Love received an invitation to become lecturer at St. Ann’s, Aldersgate, but was for three years refused his allowance by William Juxon, the bishop of London; Laud had warned Juxon to keep an eye on Love.[1] Declining episcopal ordination, he went to Scotland to seek it at the hands of the presbytery; but the Scottish Church had decreed to ordain only those who settled among them. On his return to England, about 1641, he preached at Newcastle before the mayor and aldermen, when he expressed himself so freely against the Book of Common Prayer, that he was committed to gaol. He was subsequently removed to London on a writ of Habeas Corpus, was tried in the king’s bench, and was acquitted. Around the outbreak of the First English Civil War he preached as a lecturer at Tenterden, Kent, on the lawfulness of a defensive war, and was accused of treason; but he was acquitted and recovered his costs. Shortly afterwards he was made chaplain to Colonel John Venn‘s regiment, and became preacher to the garrison of Windsor Castle.[2]

He was one of the first to receive presbyterian ordination, under the new organization, on 23 January 1644 at Aldermanbury, London, from Thomas Horton; and became pastor of St Lawrence Jewry. According to an old history of the Assembly by William Maxwell Hetherington Love was a superadded member of the Westminster Assembly.[3] However, this assertion was questioned by Alexander Ferrier Mitchell, for lack of evidence [4] and the more careful edition of the minutes of the Westminster Assembly by Chad van Dixhorn shows that Hetherington was in error and Love was not made a member of the Assembly.

He preached an inflammatory sermon in Uxbridge on 31 January 1645, the day on which the commissioners for the Treaty of Uxbridge arrived. He asserted in his Vindication that his preaching there was accidental; he was sent for by the House of Commons and confined to the house during the negotiations. On 25 November 1645 he preached before the Commons, and was not accorded the customary vote of thanks. He offended the Independents; and when they gained the ascendency he was committed to custody; he was twice subsequently cited before the committee for plundered ministers, and although he was discharged, his movements were watched.