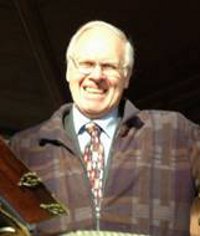 Erroll Hulse was born at Fort Beaufort in the Cape of South Africa in 1931. He graduated from Pretoria University, 1954, in architecture and later studied at London Bible College. In 1957 he co-founded The Banner of Truth with Iain Murray. Hulse also serves as editor of Reformation Today (since 1970) and director of Evangelical Press (since 1974). His pastoral experience includes Cuckfield 1962-1984, Liverpool 1984 to 1988 and as elder and associate pastor at Leeds Reformed Baptist Church 1988 to 2008.

Since 1981 Hulse has served the London Westminster Conference Committee. He founded the International Fellowship of Reformed Baptists (IFRB) and has established African Pastors’ Conferences in Botswana, Zimbabwe, and in eight locations in South Africa. His international ministry has included preaching at conferences and in churches in Asia (Philippines, Malaysia, Indonesia, Singapore and Myanmar), Europe (Romania, Latvia, Spain, Italy, Germany, the Netherlands, Cyprus, Malta), and North and South America and Africa. He has fulfilled 45 preaching tours in the USA and 35 in southern Africa.

Books published by Hulse include The Only Savior, The Great Invitation Who Saves, God or Me?, Sanctifying the Lord’s Day, Adoniram Judson and the Missionary Call, Let’s Pray for Global Revival, Give Him No Rest, An Introduction to the Baptists, Who Are The Puritans?, Baptism and Church Membership, The Believer’s Experience, and others.

Erroll and his wife Lyn have four children and eight grandchildren.