Various quotes on Who is the Antichrist 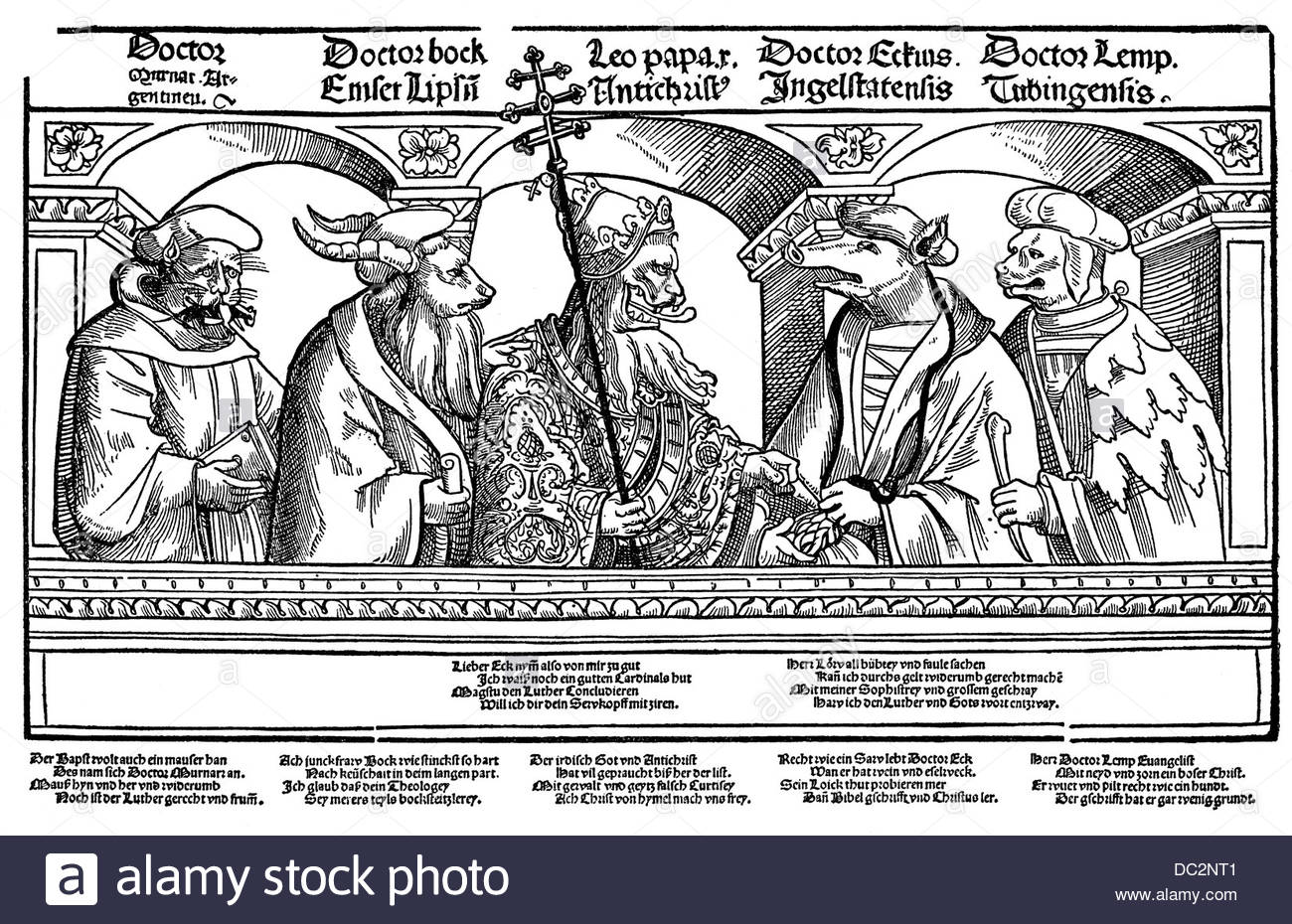 Who Did the Reformers Say Is Antichrist?

Take a look at these quotes from the great Protestant reformers showing who they believed the Bible antichrist was.

“He (the antichrist) will be revealed and come to naught before the last day, so that every man shall comprehend and recognize that the pope is the real, true antichrist and not the vicar of Christ … Therefore those who consider the pope and his bishops as Christian shepherds and bishops are deeply in error, but even more are those who believe the the Turk (ISLAM) is the antichrist. Because the Turk (ISLAM) rules outside of the church and does not sit in the holy place, nor does he seek to bear the name of Christ, but is an open antagonist of Christ and His church. This does not need to be revealed, but it is clear and evident because he persecutes Christians openly and not as the pope does, secretly under the form of Godliness.” (Nicolaus Von Amsdorf, Furnemliche und gewisse Zeichen, sig.A2r.,v.)

“nothing else than the kingdom of Babylon and of very Antichrist. For who is the man of sin and the son of perdition, but he who by his teaching and his ordinances increases the sin and perdition of souls in the church; while he yet sits in the church as if he were God? All these conditions have now for many ages been fulfilled by the papal tyranny.” (Martin Luther, First Principles, pp. 196-197)

“The sixth and last reason for our separation from the pope and his followers be this; By many writings of our church, by the Divinely inspired Word, by prophecies concerning the future and by the special characteristics of the Papacy, it has been profusely and thoroughly proved that the pope with his prelates and clergy is the real true great antichrist, that his kingdom is the real Babylon, a never ceasing fountain and a mother of all abominable idolatry.” (Flacius, Etliche Hochwichtige Ursachen und Grunde, warum das siche alle Christen von dem Antichrist … absondern sollen)

“The Jesuits claim to be sorely offended and have taken my declarations as an insult and blasphemy in branding the Papacy as the antichrist of which Daniel, Paul, Peter, John and even Christ prophesied. But this is as true as it is that Jesus is the Messiah, and I am prepared to show it even by their own definition of the word ‘antichrist’.” (Translated from “Nigrinus, Antichrists Grundliche Offenbarung” fol. 6v.)

“This Jesuit further contends that the Papacy cannot be antichrist because the Papacy has lasted for centuries, but that the antichrist is supposed to reign only for 3 1/2 years … But no one doubts today that Daniel spoke of YEAR-DAYS, not literal days … The prophetic time-periods of forty-two months, 1260 days, 1, 2, 1/2 times are prophetic, and according to Ezekiel 4, a day must be taken for a year.” (Translated from “Nigrinus, Antichrists Grundliche Offenbarung” fols.28v. 29r.)

“Though it be admitted that Rome was once the mother of all Churches, yet from the time when it began to be the seat of Antichrist it has ceased to be what it was before. Some persons think us too severe and censorious when we call the Roman Pontiff Antichrist. But those who are of this opinion do not consider that they bring the same charge of presumption against Paul himself, after whom we speak and whose language we adopt .. I shall briefly show that (Paul’s words in II Thess. 2) are not capable of any other interpretation than that which applies them to the Papacy.” (Institutes of the Christian Religion, Vol.3, p.149)

Yea, to speak it in plain words; lest that we submit ourselves to Satan, thinking that we submit ourselves to Jesus Christ, for, as for your Roman kirk, as it is now corrupted, and the authority thereof, whereon stands the hope of your victory, I no more doubt but that it is the synagogue of Satan, and the head thereof, called the pope, to be that man of sin, of whom the apostle speaks.” (John Knox, The History of the Reformation of Religion in Scotland, p.65)

“Whereof it followeth Rome to be the seat of Antichrist, and the pope to be very antichrist himself. I could prove the same by many other scriptures, old writers, and strong reasons.” (Works by Cranmer, vol.1, pp.6-7)

Pastor Williams spoke of the Pope as “the pretended Vicar of Christ on earth, who sits as God over the Temple of God, exalting himself not only above all that is called God, but over the souls and consciences of all his vassals, yea over the Spirit of Christ, over the Holy Spirit, yea, and God himself…speaking against the God of heaven, thinking to change times and laws; but he is the son of perdition.” (The Prophetic Faith of Our Fathers by Froom, Vol. 3, pg. 52)

The Baptist Confession of Faith (1689) *Not technically a Reformed document

“The Lord Jesus Christ is the Head of the church, in whom, by the appointment of the Father, all power for the calling, institution, order or government of the church, is invested in a supreme and sovereign manner; neither can the Pope of Rome in any sense be head thereof, but is that antichrist, that man of sin, and son of perdition, that exalteth himself in the church against Christ.” (1689 Baptist Confession of Faith)

The Westminster Confession of Faith (1646)

“There is no other head of the Church but the Lord Jesus Christ: nor can the Pope of Rome in any sense be head thereof; but is that Antichrist, that man of sin and son of perdition, that exalts himself in the Church against Christ, and all that is called God.” (1646 Westminster Confession of Faith)

“… In many respects, the Pope has an indisputable claim to those titles. He is, in an emphatical sense, the man of sin, as he increases all manner of sin above measure. And he is, too, properly styled, the son of perdition, as he has caused the death of numberless multitudes, both of his opposers and followers, destroyed innumerable souls, and will himself perish everlastingly. He it is that opposeth himself to the emperor, once his rightful sovereign; and that exalteth himself above all that is called God, or that is worshipped – Commanding angels, and putting kings under his feet, both of whom are called gods in scripture; claiming the highest power, the highest honour; suffering himself, not once only, to be styled God or vice-God. Indeed no less is implied in his ordinary title, “Most Holy Lord,” or, “Most Holy Father.” So that he sitteth – Enthroned. In the temple of God – Mentioned Rev. xi, 1. Declaring himself that he is God – Claiming the prerogatives which belong to God alone.” (John Wesley, Explanatory Notes Upon The New Testament, p.216)

“It is the bounden duty of every Christian to pray against Antichrist, and as to what Antichrist is no sane man ought to raise a question. If it be not the popery in the Church of Rome there is nothing in the world that can be called by that name. If there were to be issued a hue and cry for Antichrist, we should certainly take up this church on suspicion, and it would certainly not be let loose again, for it so exactly answers the description.”

“Popery is contrary to Christ’s Gospel, and is the Antichrist, and we ought to pray against it. It should be the daily prayer of every believer that Antichrist might be hurled like a millstone into the flood and for Christ, because it wounds Christ, because it robs Christ of His glory, because it puts sacramental efficacy in the place of His atonement, and lifts a piece of bread into the place of the Saviour, and a few drops of water into the place of the Holy Ghost, and puts a mere fallible man like ourselves up as the vicar of Christ on earth; if we pray against it, because it is against Him, we shall love the persons though we hate their errors: we shall love their souls though we loath and detest their dogmas, and so the breath of our prayers will be sweetened, because we turn our faces towards Christ when we pray.” (Michael de Semlyen, All Roads Lead to Rome)

“The same line of proof which establishes that Christ is the promised Messiah, conversely applied, establishes that the Roman system is the predicted Apostacy. In the life of Christ we behold the converse of what the Antichrist must be; and in the prophecy of the Antichrist we are shown the converse of what Christ must be, and was. And when we place the Papacy between the two, and compare it with each, we find, on the one hand, that it is the perfect converse of Christ as seen in his life; and on the other, that it is the perfect image of the Antichrist, as shown in the prophecy of him. We conclude, therefore, that if Jesus of Nazareth be the Christ, the Roman Papacy is the Antichrist.” (J.A.Wylie, Preface to “The Papacy is the Antichrist, A Demonstration”).