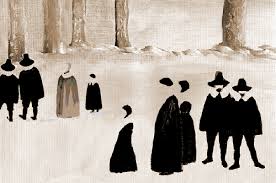 The Character of and Old English Puritan

Though we might deal with the era of Puritanism (conservatively from 1559-1662, and theologically until the times of Jonathan Edwards) as an historical “time period,” we often forget the deep spirituality and desire to glorify Jesus Christ as the center point of the Puritan goal.

This short work, The Character of an Old English Puritan, or Non-Conformist, by John Geree (1601?–1649), is a help to this end of discerning who the puritan really was. John Geree M.A. was a Preacher of the Word at, Tewksbury, then at St. Albons. This work was published according to order London, and printed by W. Wilson for Christopher Meredith at the Crane in Paul’s Church-yard. It was originally published in 1646, the same year the Westminster Assembly completed the draft of the Westminster Confession.

When one asks, “What was a Puritan?” You could do no better than to send them to this article by Geree. John Geree was a contemporary of Puritanism that explained some of the details of what a Puritan was. He was an English Puritan minister of the Gospel, born in Yorkshire. He graduated with a B.A. from Oxford on January 27, 1619, and an M.A. on June 12, 1621. Having taken a position as a minister he obtained the living of Tewkesbury, Gloucestershire.

For not conforming to the ceremonies of the Church of England he was silenced (after 1624) by Godfrey Goodman, bishop of Gloucester, and reduced to live on charity. In 1641 he was restored to his position by the committee for plundered ministers, and remained there until, on March 14, 1646, he was appointed to the rectory of St. Albans, Hertfordshire. Here he engaged in a controversy with the baptist separatist John Tombes, who had been his fellow-student at Oxford.

He left St. Albans in 1647, having been appointed preacher at St. Faith’s, under St Paul’s Cathedral in London. His residence in February 1648 was in Ivy Lane, Paternoster Row. In London, as elsewhere, his sermons were largely attended by Puritans. He was strongly averse to episcopacy, and published his Case of Conscience, 1646, to prove that the king might consent to its abolition without breaking his coronation oath. He died in February 1649.

The Character of an Old English Puritan, or Non-Conformist

Why You Should Read the Puritans by Joel Beeke

Why You Should Read the Puritans by Joel Beeke

Farewell Sermons – by the Puritans

In Defense of the Puritans – by Martin Brown

Puritan Roots: A Brief Sketch of the Values of Puritanism – by Dr. C. Matthew McMahon

Reformation for the Glory of God – by Samuel T. Logan. Jr.

Spiritual Characteristics of the First Christian Society in America – by Dr. Iain Murray

The Example of the English Puritans – by Erroll Hulse

Tidbits of Faith – by Various Authors

What Can the Puritans Teach Us? – by Dr. C. Matthew McMahon

Where Oh Where has the Precisionist Gone? – by Dr. C. Matthew McMahon