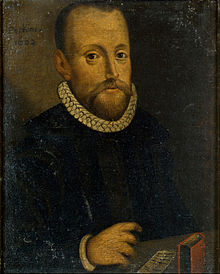 William Perkins (1558–1602) was an influential English cleric and Cambridge theologian, receiving both a B.A. and M.A. from the school in 1581 and 1584 respectively, and also one of the foremost leaders of the Puritan movement in the Church of England during the Elizabethan era. Although not entirely accepting of the Church of England’s ecclesiastical practices, Perkins conformed to many of the policies and procedures imposed by the Elizabethan Settlement. He did remain, however, sympathetic to the non-conformist puritans and even faced disciplinary action for his support.

Perkins was a prolific author who penned over forty works, many of which were published posthumously. In addition to writing, he also served as a fellow at Christ’s College and as a lecturer at St Andrew’s Church in Cambridge. He was a firm proponent of Reformed theology, particularly the supralapsarian theology of Theodore Beza and John Calvin. In addition, he was a staunch defender of Protestant ideals, specifically the five solae with a particular emphasis on solus Christus and sola Scriptura.

Cases of Conscience – An Excerpt by Dr. William Perkins

Perkins on Predestination and Preaching – by Dr. Joel Beeke

The Order of Salvation and Damnation by Dr. William Perkins