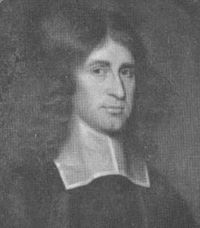 He was born at Kirkcaldy, where his father, John Gillespie, was parish minister, and studied at St. Andrews University as a “presbytery bursar”. On graduating he became domestic chaplain to John Gordon, 1st Viscount Kenmure (d. 1634), and afterwards to John Kennedy, 6th Earl of Cassilis. His conscience did not permit him to accept the episcopal ordination which was at that time in Scotland an indispensable condition of induction to a parish.

In April 1638, soon after the authority of the bishops had been set aside by the nation in Scotland, Gillespie was ordained minister of Wemyss (Fife) by the presbytery of Kirkcaldy. In the same year he was a member of the Glasgow Assembly, before which he preached (November 21) a sermon against royal interference in matters ecclesiastical. It was so pronounced, as to call for some remonstrance on the part of Argyll, the lord high commissioner.

In 1640 he accompanied the commissioners of the peace to England as one of their chaplains. In 1642 Gillespie was translated to Edinburgh; but the remainder of his life was chiefly spent in the conduct of public business in London. He was from 1643 a member of the Westminster Assembly, in which he took a prominent part: he was appointed by the Scottish Church one of the four commissioners to the Assembly. Here he was the youngest member, but took a prominent part in almost all the discussions on church government, discipline and worship, supporting Presbyterianism by numerous controversial writings, as well as by fluency and readiness in debate. Tradition long preserved especially his encounter with John Selden on Matt. xviii. 15-17.

In 1645 he returned to Scotland, and is said to have drawn the Act of Assembly sanctioning the directory of public worship. On his return to London he had a hand in drafting the Westminster confession of faith, especially chap. I.

Gillespie was elected moderator of the Assembly in 1648, but the duties of that office (the court continued to sit from the 12 July to the 12 August) told on his health; he fell into consumption, and died at Kirkcaldy on the 17 December 1648. In acknowledgment of his public services, a sum of 1000 Scots was voted, though destined never to be paid, to his widow and children by the committee of estates. A simple tombstone, which had been erected to his memory in Kirkcaldy parish church, was in 1661 publicly broken at the cross by the hand of the common hangman, but was restored in 1746.

Church Government in the Writings of George Gillespie

Whether Any Other But A Minister, Lawfully Called And Ordained, May Administer The Sacraments, Baptism And The Lord’s Supper.

The Solemn League and Covenant

Who are Not True Christians?

What is Christian Liberty?