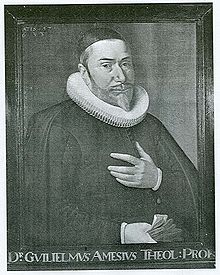 “Nothing exists from eternity but God, and God is not the matter or a part of any creature, but only the maker”.

WILLIAM AMES (1576-1633), English Puritan divine, better known, especially in Europe, as Amesius, was born of an ancient family at Ipswich, Suffolk, in 1576, and was educated at the local grammar school and at Christ’s College, Cambridge, where, as throughout his life, he was an omnivorous student. He was considerably influenced by his tutor, the celebrated William Perkins, and by his successor, a man of kindred intellect and fervour, Paul Bayne. He graduated B.A. and M.A. in due course, and was chosen to a fellowship in Christ’s College. He was universally beloved in the university. His own college (Christ’s) would have chosen him for the mastership; but a party opposition led to the election of Valentine Cary, who had already quarrelled with Ames for disapproving of the surplice and other outward symbols. One of Ames’s sermons became historical in the Puritan controversies.

It was delivered on St Thomas’s day (1609) before the feast of Christ’s nativity, and in it he rebuked sharply “lusory lotts” and the “heathenish debauchery” of the students during the twelve days ensuing. The scathing vehemence of his denunciations led to his being summoned before the vice-chancellor, who suspended him “from the exercise of his ecclesiastical function and from all degrees taken or to be taken.” After Cary’s election he left the university and would have accepted the great church of Colchester, but the bishop of London refused to grant institution and induction. Like persecution awaited him elsewhere, and at last he passed over to Holland, being aided by certain wealthy English merchants who wished him to controvert the supporters of the English church in Leiden. At Rotterdam, clad in the fisherman’s habit donned for the passage, he opposed Grevinchovius (Nicholas Grevinckhoven, d. 1632), minister of the Arminian or Remonstrant church, and overwhelmed him with his logical reasoning from Phil. ii. 13, “It is God that worketh in us both to will and to do.” The fisherman controversialist made a great stir, and from that day became known and honoured in the Low Countries. Subsequently Ames entered into a controversy in print with Grevinchovius on universal redemption and election, and cognate problems. He brought together all he had maintained in his Coronis ad Collationem Hagiensem – his most masterful book, which figures largely in Dutch church history. At Leiden, Ames became intimate with the venerable Mr Goodyear, pastor of the English church there. While thus resident in comparative privacy he was sent for to the Hague by Sir Horatio Vere, the English governor of Brill, who appointed him a minister in the army of the states-general, and of the English soldiers in their service, a post held by some�of the greatest of England’s exiled Puritans. He married a daughter of Dr Burgess, who was Vere’s chaplain, and, on his father-in-law’s return to England, succeeded to his place.

It was at this time he began his memorable controversy with Episcopius, who, in attacking the Coronis, railed against the author as having been “a disturber of the public peace in his native country, so that the English magistrates had banished him thence; and now, by his late printed Coronis, he was raising new disturbances in the peaceable Netherlands.” It was a miserable libel and was at once rebutted by Goodyear. The Coronis had been primarily prepared for the synod of Dort, which sat from November 1618 until May 1619. At this celebrated synod the position of Ames was a peculiar one. The High Church party in England had induced Vere to dismiss him from the chaplaincy; but he was still held, deservedly, in such reverence, that it was arranged he should attend the synod, and accordingly he was retained by the Calvinist party at four florins a day to watch the proceedings on their behalf and advise them when necessary.

A proposal to make him principal of a theological college at Leiden was frustrated by Archbishop Abbot; and when later invited by the state of Friesland to a professoriate at Franeker, the opposition was renewed, but this time abortively. He was installed at Franeker on the 7th of May 1622, and delivered a most learned discourse on the occasion on “Urim and Thummin.” He soon brought renown to Franeker as professor, preacher, pastor and theological writer. He prepared his Medulla Theologiae, a manual of Calvinistic doctrine, for his students. His De Conscientia, ejus Jure et Casibus (1632), an attempt to bring Christian ethics into clear relation with particular cases of conduct and of conscience, was a new thing in Protestantism. Having continued twelve years at Franeker (where he was rector in 1626), his health gave way, and he contemplated removal to New England. But another door was opened for him. He yearned for more frequent opportunities of preaching to his fellow-countrymen, and an invitation to Rotterdam gave him such opportunity. His, friends at Franeker were passionately opposed to the transference, but ultimately acquiesced. At Rotterdam he drew all hearts to him by his eloquence and fervour in the pulpit, and his irrepressible activity as a pastor. Home-controversy engaged him again, and he prepared his Fresh Suit against Ceremonies – the book`which made Richard Baxter a Nonconformist. It ably sums up the issues between the Puritan school and that of Hooker. It was posthumously published. He did not long survive his removal to Rotterdam. Having caught a cold from a flood which inundated his house, he died in November 1633, at the age of fifty-seven, apparently in needy circumstances. He left, by a second wife, a son and a daughter. His valuable library found a home in New England.

Few Englishmen have exercised so formative and controlling an influence on European thought and opinion as Ames. He was a master in theological controversy, shunning not to cross swords with the formidable Bellarmine. He was a scholar among scholars, being furnished with extraordinary resources of learning. His works, which even the Biographia Britannica (1778) testifies were famous over Europe, were collected at Amsterdam in 5 vols. 4to. Only a very small proportion was translated into his mother tongue. His Lectiones in omnes Psalmos Davidis (1635) is exceedingly suggestive and terse in its style, reminding of Bengel’s Gnomon, as does also his Commentarius utriusque Epist. S. Petri. His “Replies” to Bishop Morton and Dr Burgess on “Ceremonies” tell us that even kinship could not prevent him from “contending earnestly for the faith.” See John Quick’s MS. Icones Sacrae Anglicanae, which gives the fisherman anecdote on the personal authority of one who was present; Life by Nethenus prefixed to collected edition of Latin works (5 vols., Amsterdam, 1658); Winwood’s Memorials, vol. iii. PP. 34 6 -347; Neal’s Puritans, i. 532; Fuller’s Cambridge (Christ’s College); Hanbury’s Hist. Memorials, i. 533; Collections of the Massachusetts Historical Society, vol. vi., fourth series, 1863, PP. 576-577.

Ames on the Attributes of God (Chart)

Faith – How We Define It

How should we think about the Sabbath Day?

Romans 5:12 and Sin Entering the World – by William Ames

The Covenant of Grace

The Death of Christ

The Decrees of God

The Efficiency of God

The End of the World

The Essence of God

The Manner of Worship

The Moral Theology of William Ames

The Nature of Theology

The Parts of Theology

The Subsistence of God