Act, Declaration, & Testimony for the Whole of our Covenanted Reformation 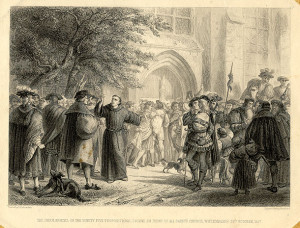 “Again, they profess and declare, that the active and passive obedience, or the complete mediatory righteousness, of the Lord Jesus Christ, is the only meritorious cause of a sinner’s justification, pardon of sin, and acceptance of his person and services with a holy God; and that true and saving faith, which is also the gift of God, is the alone instrumental cause of the sinner’s justification in his sight; or that evangelical condition, or internal mean, in and by which the soul is interested in Christ, and the whole of his righteousness and salvation. Which righteousness, received and rested on by faith, is the only foundation of a sinner’s title to eternal life and glory; as appears evident from Rom 3:22-29; Rom. 5:17-20; Jer. 23:6; Gal. 2:16; Acts 10:43; Col. 1:27; Acts 8:37; Rom. 10:9; Mark 5:36; Eph. 2:8; Confess. chap. 11, 14; larg. Cat. ques, 70, 3; sh. Cat. ques. 3.

They likewise profess and maintain, that believers, by the righteousness of Christ being just fled from all things, from which they could not be justified by the law of Moses, are by Jesus Christ perfectly delivered from the law, as a covenant of works, both as commanding and condemning; so as that thereby they are neither justified nor condemned, it being dead to them, and they to it, by the body of Christ, to whom they are married. However, notwithstanding of this freedom, they are still servants unto God; still under the moral law, as a rule of life in the hand of their glorious Mediator and new covenant Head, directing them how they are to walk, so as to please God; the obligation whereof, as such, remains perpetual and indissoluble; and that this privilege is peculiar to believers only, all others being still under the old covenant obligation, both as to the debt of obedience and punishment; according to Rom. 6:14, and 7:4, 6; Gal. 4:4,5, and 2:16; Rom. 8:1; Gal. 3:10; Confess. chap. 19 sec. 5,6; larg. Cat. ques. 97; sh. Cat. Ques. 43, 44.”

– Act, Declaration, & Testimony for the Whole of our Covenanted Reformation, as Attained to, and Established in Britain and Ireland; Particularly Betwixt the Years 1638 and 1649, Inclusive, Rue&Jones, Philadelphia, [1876]. p. 187.