23 The same day Sadducees came to him, who say that there is no resurrection, and they asked him a question, 24 saying, “Teacher, Moses said, ‘If a man dies having no children, his brother must marry the widow and raise up children for his brother.’ 25 Now there were seven brothers among us. The first married and died, and having no children left his wife to his brother. 26 So too the second and third, down to the seventh. 27 After them all, the woman died. 28 In the resurrection, therefore, of the seven, whose wife will she be? For they all had her.”

29 But Jesus answered them, “You are wrong, because you know neither the Scriptures nor the power of God. 30 For in the resurrection they neither marry nor are given in marriage, but are like angels in heaven. 31 And as for the resurrection of the dead, have you not read what was said to you by God: 32 ‘I am the God of Abraham, and the God of Isaac, and the God of Jacob’? He is not God of the dead, but of the living.” 33 And when the crowd heard it, they were astonished at his teaching. 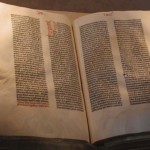 1) Paedobaptism-the sign changing from circumcision to water baptism
a) Female infants and their covenantal status-females are ‘in’ covenant even though in the OT they did not have a sign placed on them.

3) The Covenant of grace and redemption

6) The local church vs the Universal Church