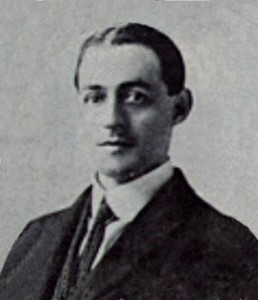 Click here to go to A. W. Pink articles

Arthur Walkington Pink was born in Nottingham, England on 1 April 1886 and became a Christian in 1908, at the age of 22. Though born to Christian parents, prior to conversion he migrated into a Theosophical society (the occult gnostic group which became precursor of the New Age movement, popular in England during that time), and quickly rose in prominence within their ranks. His conversion came from his father’s patient admonitions from Scripture. It was the verse, Proverbs 14:12, ‘there is a way which seemeth right unto a man, but the end thereof are the ways of death,’ which particularly struck his heart and compelled him to renounce Theosophy and follow Jesus.

Desiring to grow in knowledge of the Bible, Pink emigrated to the United States to study at Moody Bible Institute. He left there after only two months and began his first pastorate in Silverton Colorado. In 1916 he married Vera E. Russell (8 January 1893 – 17 July 1962), who was from Kentucky. However, he left after just two months for Colorado, then California, then Britain. From 1925 to 1928 he served in Australia, including as pastor of two congregations from 1926 to 1928, when he returned to England, and to the United States the following year. He eventually pastored churches in Colorado, California, Kentucky, and South Carolina.

In January 1922[1] he started a monthly magazine entitled Studies in the Scriptures which circulated among English-speaking Christians worldwide, though only to a relatively small circulation list of around 1,000.

In 1934 Pink returned to England, and within a few years turned his Christian service to writing books and pamphlets. Pink died in Stornoway, Scotland on 15 July 1952. The cause of death was anemia.

After Pink’s death, his works were republished by a number of publishing houses, among them, Banner of Truth Trust, Baker Book House, Christian Focus Publications, Moody Press, Truth for Today, and reached a much wider audience as a result. Biographer Iain Murray observes of Pink, “the widespread circulation of his writings after his death made him one of the most influential evangelical authors in the second half of the twentieth century.” His writing sparked a revival of expository preaching and focused readers’ hearts on biblical living. Pink is left out of many biographical dictionaries and overlooked in many religious histories.

Taken from Wikipedia: A. W. Pink

Here is an excerpt from Phil Johnson’s site, ‘Pyromaniac’ written by Dan Phillips. In this post of Phillips, he writes:

Pink’s life goes south in a number of ways. He eschews any kind of apprenticeship or training, too devoted to himself and his own endeavors. This will yield mixed fruit: the intensity of his studies will indeed give Pink some good material to give away. However, this isolation is constantly and roundly warned against in Scripture, which commends instead humble exposure to the reproof and counsel of others (e.g. Prov. 10:17; 12:1;13:18; 15:5, 10, 31-32; 18:1-2; etc.). As anyone who reads and believes the Bible could have predicted, baleful effects follow foolish choices.

Pink attempts to pastor, but ends up careening from location to location to location. Pink prefers talking to people from a great distance (i.e. writing), and ends up devoted to that activity solely, in complete isolation from any personal contact with Christ’s church or the means of grace. Which brings me to set these two passages in contrast.

He labored faithfully for his remaining twelve years of life, writing and producing the periodical while he lived in virtual isolation, not even attending a local church. He justified this behavior by explaining that the admonition not to neglect the assembling of ourselves together does not mean that the sheep of Christ should attend a place where the goats predominate or where their attendance would sanction that which is dishonoring to Christ. On Sundays he spent his time pastoring his flock of faithful readers by writing letters answering their questions concerning the Bible and theology. Would-be visitors who had traveled great distances to Stornoway were discouraged as they were usually turned away, not being allowed to see him. The townspeople knew little about him, except that each day at a certain hour he took a walk through the town.

Pink also believed in, practiced, and preached holiness of life, including sacrificial living for his Lord. He longed to do the will of God, whatever it might be. He searched and searched, prayed and prayed, waited and waited to learn the will of God, and finally surrendered to do what was unmistakably God’s will—the use of his pen. [Ibid., 140.]

These passages in juxtaposition give us an opportunity to consider what I’ve hammered on again and again, just about every place I have a chance.

The second passage tells us Pink was holy, and committed to “sacrificial living for his Lord,” doing the will of God heroically, surrendering to “what was unmistakably God’s will—the use of his pen.” But the first passage had told us that Pink had no time for pursuing the second most important thing in the universe according to Jesus: love your neighbor as yourself (Matt. 22:36-40).

Now, like all religious people, Pink worked out what the biographer calls a “justification,” which as always is nothing but a rationalization. And the biographer gives Pink a pass, because he was such a splendid writer. So because of Pink’s (and the biographer’s) writing, Christians are once again urged to the fiction that one can seek and do the “will of God” in direct and continued disobedience to the Word of God.

Because the second passage is utter nonsense, to a Biblical Christian. DisobeyingGod’s direct, unambiguous and insistent commands to be personally in community, under the oversight of elders, is not “holiness of life,” and it is not “sacrificial living for the Lord.” It is indulgent and arrogant living for oneself. It is someone who didn’t seem, in any way, to “get” what it means to live and think like a slave.

In fact, mark the first passage. Not only was Pink too good to associate with imperfect saints (where he is not in charge and running things his way); he would not even accept visitors. Pink must have imagined that he had some mystical exemption from Romans 12:13, Hebrews 13:2, and 1 Peter 4:9as well as the previously-noted commands. And while he wrote very critically and insistently upon evangelism, and how everyone else was doing it wrong, “The townspeople knew little about him, except that each day at a certain hour he took a walk through the town.” So according to this, Pink “practiced holiness” by neither actually obeying the Word of God, nor even through practicing what he literarily preached.

Instead, here once again this ugly specter of a mystical, individual will of God that in fact trumps the written Word of God rears its devastating head. The writer is content that God had a will for Pink that trumped the revealed will He inscripturated for all saints at all times and in all places. God’s inerrant and unchanging and living Word is packed with “one-anothers” to be lived in the fellowship of the local church; but to A. W. Pink, we are given to think that He whispered, “Not you, Arthur. I want you to disobey what I told everyone else to do and stay at home, isolated and distant, practicing none of the graces of the Spirit, lecturing others about their responsibility. You just write; and in your writings, urge others to the obedience and holiness from which I am hereby excusing you.”

So you see, like many who have tried to ply their wares in our metas, Pink imagined he had a “note from God” excusing him for actually obeying those commands God addressed to lesser beings. And the biographer apparently confirms that note.

You want to say Pink wrote some helpful things? If you say so. You want to tell me he’s a model of Christian holiness and sacrificial living and integrity?

Yeah, I don’t think so. In walking after Christ I constantly struggle (cf. Gal. 5:17ff.), I too frequently fail, I am at unceasing war with my own inconsistencies and inadequacies. The human knack for rationalization is an ever-present risk and fear.

The last thing I need held up for emulation is a man who found a way to avoid that whole struggle by pious-sounding excuses.

More can be had here in these writings: