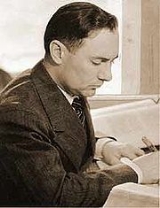 Gordon Haddon Clark (August 31, 1902 – April 9, 1985) was an American philosopher and Calvinist theologian. He was a leading figure associated with presuppositional apologetics and was chairman of the Philosophy Department at Butler University for 28 years. He was an expert in pre-Socratic and ancient philosophy and was noted for his rigor in defending propositional revelation against all forms of empiricism and rationalism, in arguing that all truth is propositional and in applying the laws of logic. His theory of knowledge is sometimes called scripturalism.