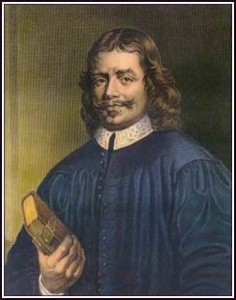 John Bunyan (28 November 1628 – 31 August 1688) was an English Christian writer and preacher, who is well known for his book The Pilgrim’s Progress. Though he became a non-conformist and member of an Independent church, and although he has been described both as a Baptist and as a Congregationalist, he himself preferred to be described simply as a Christian. He is remembered in the Church of England with a Lesser Festival on August 30, and on the liturgical calendar of the Episcopal Church (US) on August 29. Some other Churches of the Anglican Communion, such as the Anglican Church of Australia, honour him on the day of his death (August 31) together with St Aidan of Lindisfarne.